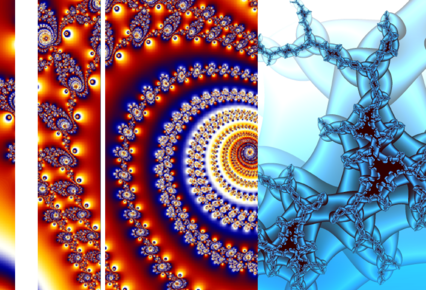 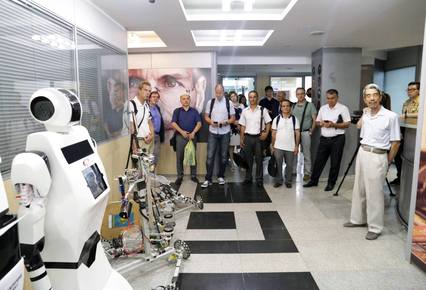 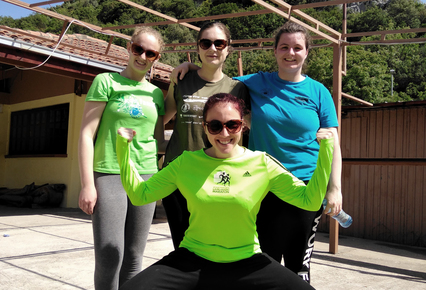 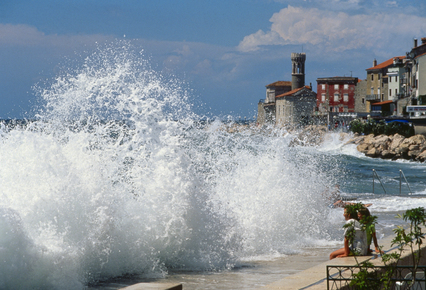 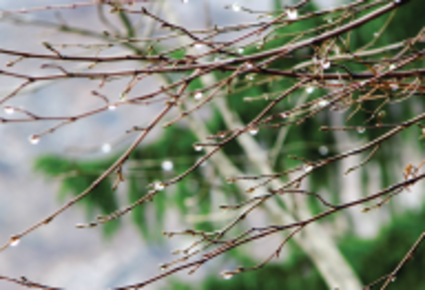 The European Credit Transfer System (ECTS) is applied in all study programs. 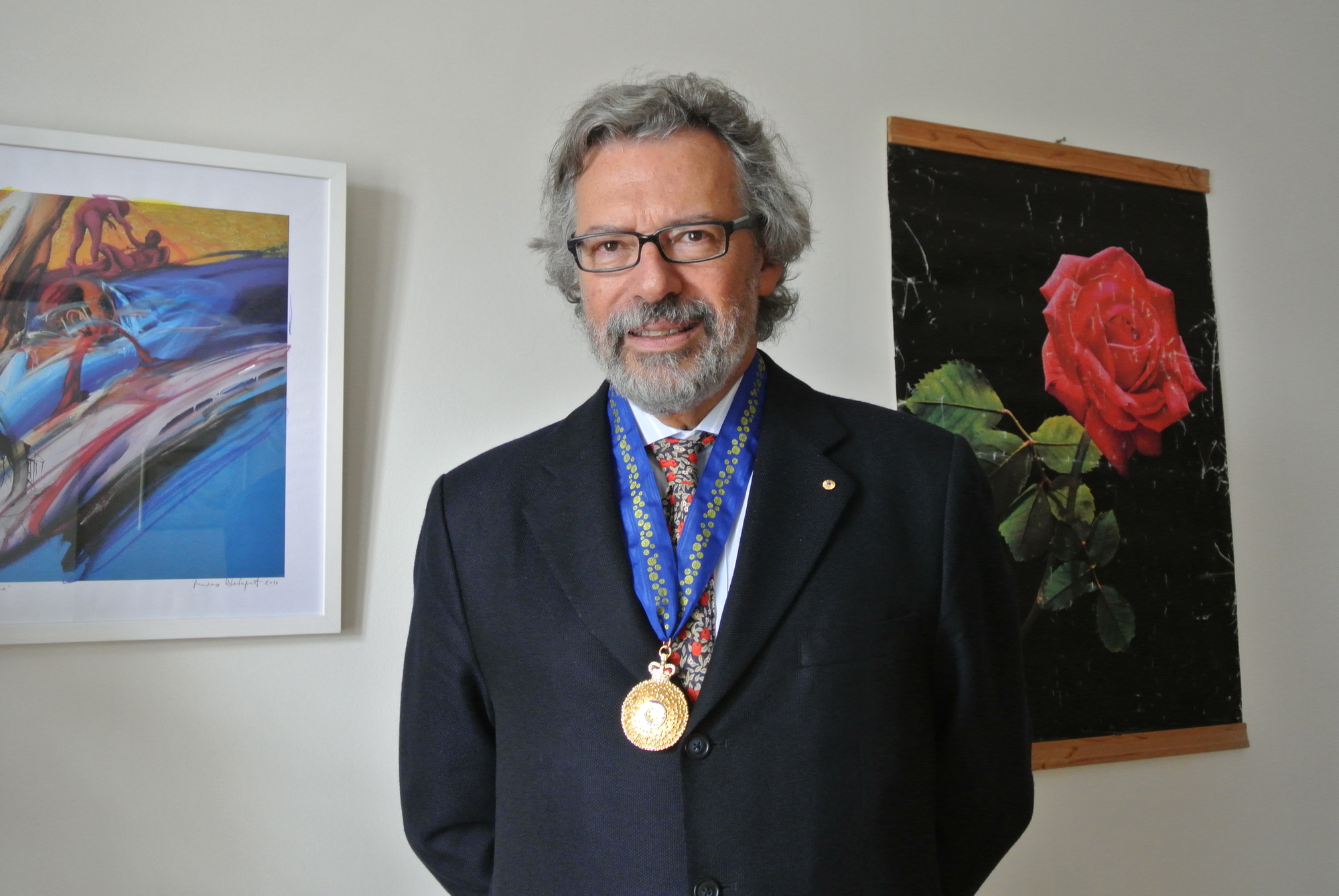 Chair of our Department of Psychology, was awarded with the title Officer of the Order of Australia. His title, the second highest award available, was announced by the Governor-General, Ms Quentin Bryce, on Australia Day.

He received his honours for distinguished service to medicine in the field of psychiatry as a researcher and through the creation of national and international strategies for suicide prevention. 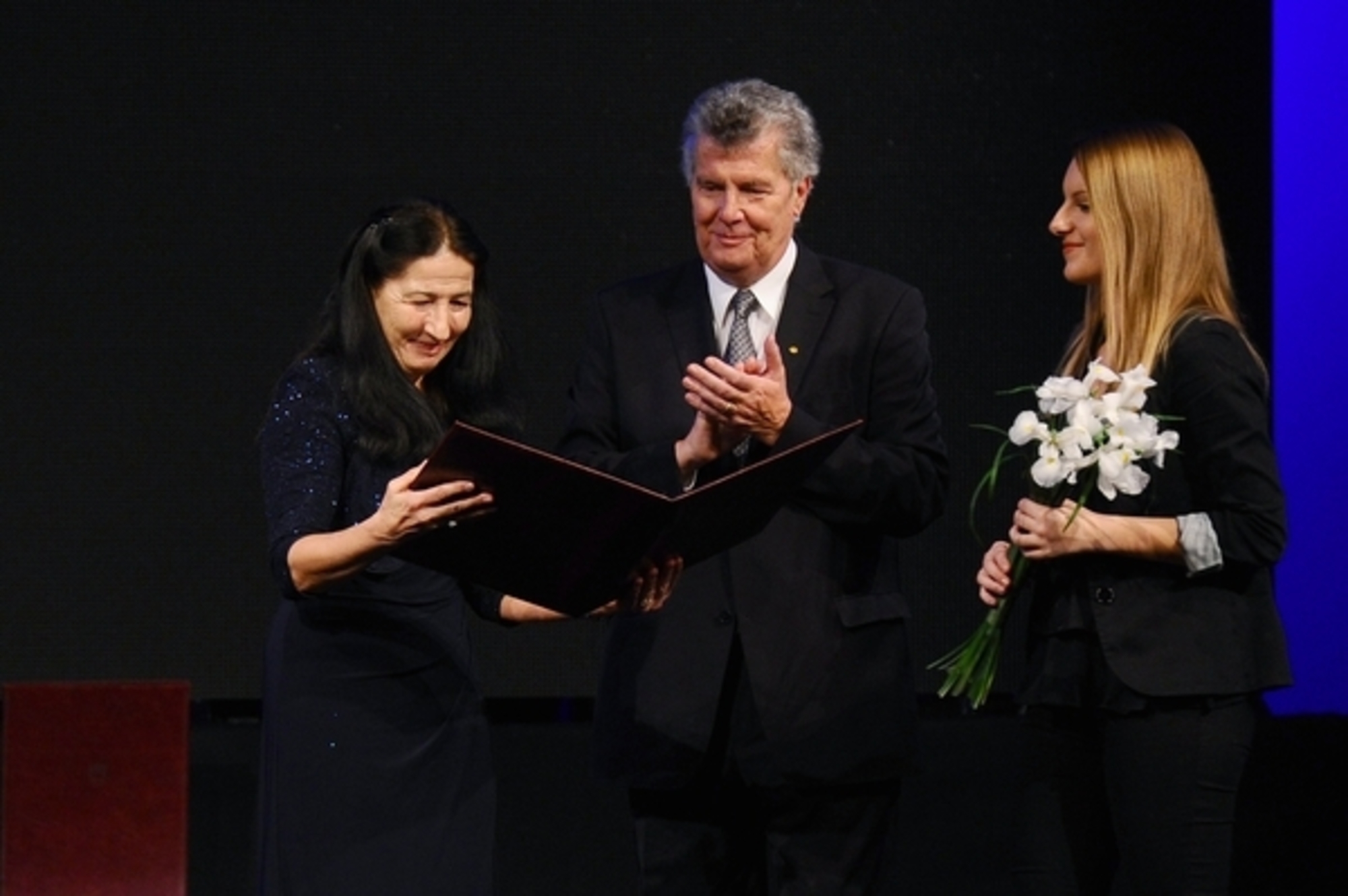 Prof. Janežič is a full professor at UP FAMNIT and a Scientific Councillor at the Faculty of Chemistry and Chemical Technology of the University of Ljubljana. Her scientific research work is focused on enhancement, development and introduction of new methods and algorithms in molecular modelling. With her long-time scientific, research, pedagogic and professional work she gained significant reputation among the leading experts all around the globe.

In 2013, four of our teaching and research staff received special recognition for their work. In collaboration with the University of Primorska and the University of Nova Gorica, media houses Radio Koper, Television Koper-Capodistria and Primorske novice awarded Assoc. Prof. Štefko Miklavčič for introducing cutting-edge knowledge into practise. For his article on dolphins in the Slovenian sea in the magazine Proteus, assistant Tilen Genov was awarded with Kavčič award for best short article from the field of Natural Sciences in 2012. In October, the Slovenian Research Agency presented our Prof. Dušanka Janežič's work in the field of computationally intensive methods and applications as an outstanding scientific achievement. Later on, Prof. Janežič from our Department of Applied Natural Sciences was also awarded with the prestigious Zois award. The Slovenian Science Foundation, which tends to accelerate and promote science in research, honoured Assist. Prof. Andraž Teršek with the ''Prometheus of Science'' award for Excellence in Communicating Science in 2013.  Prof. Teršek was also listed among the top ten most influential lawyers in 2013, a ranking, which is gaining increasing recognition in both professional as well as the general public and is carried out on Slovenian central legal portal IUS-INFO.

Special achievements of our students in 2013

2013 was a very successful year for our students. In the strong In April, six of our students participated at the Vojtěch Jarník International Mathematical Competition in the Czech Republic. Ratko Darda was particularly successful and gained half of all points in this very demanding competition.

International Natural Sciences competition Primatijada 2014 was held in June in Montenegro and brought lots of success to our students. In the mathematic competition Marija Jurković won 1st place and Nastja Cepak 3rd, while in the competition from informatics and programming Andrej Godec and Rudi Kovač shared 1st place and Matjaž Šuber got 3rd.

Mathematical competitions continued in August with International Mathematics Competition for University Students 2013. Anastasiya Tanana won second prize and Edin Husić and Radovan Krtolica got Honourable mention. Let us emphasize in this place that all participating students from all over the world competed in the same category and our students were among the youngest contestants.

In October, Tomaž Tomažinčič and Andrej Godec competed at the national University programming marathon. As the winning team of the internal competition of the University of Primorska they represented our University and took 15th place among 49 competing teams. 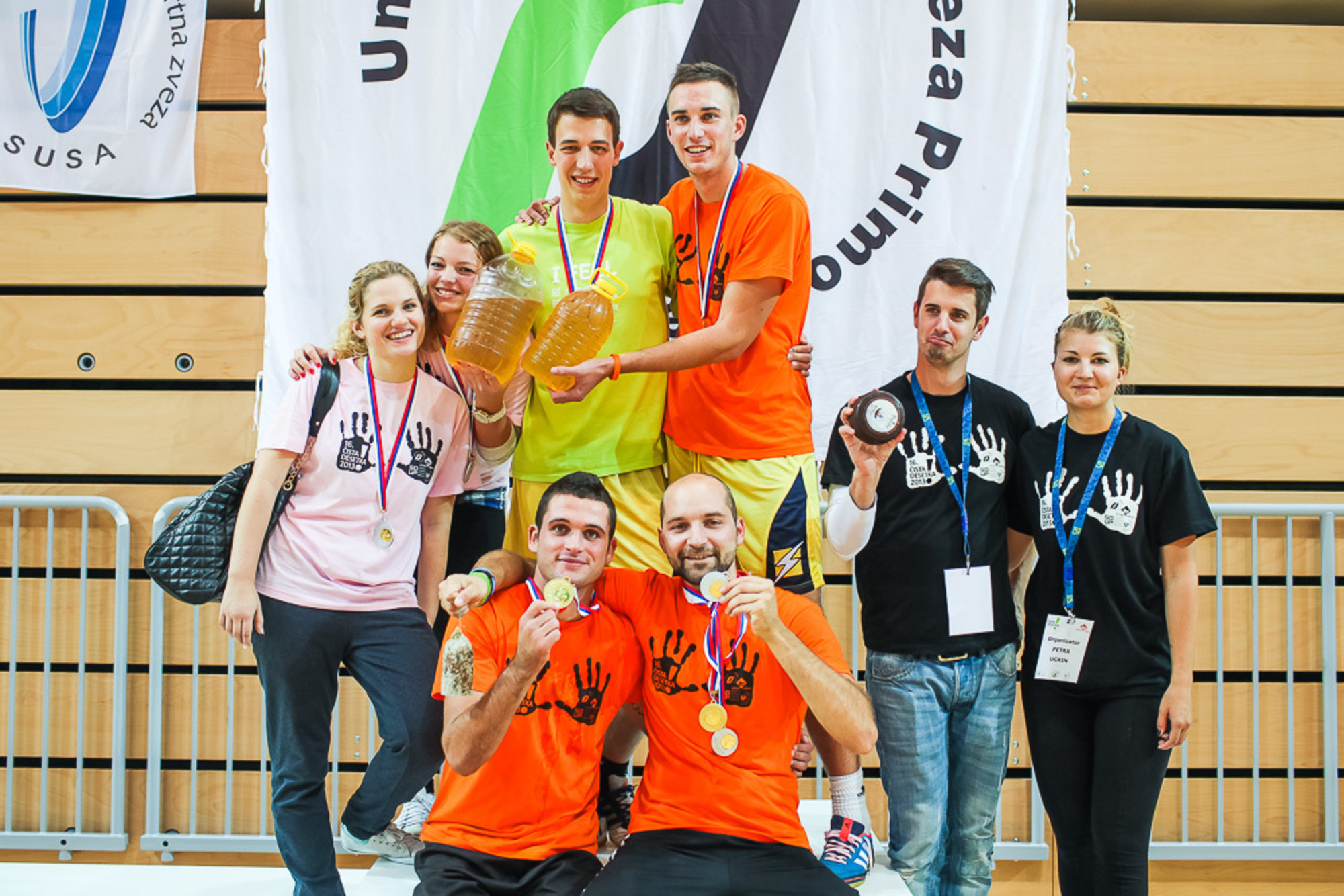 ontest Podjetna Primorska and was listed among the finalists in his category.

In 2013 UP FAMNIT successfully accredited new master’s programme Biopsychology, which provides an upgrade to existing undergraduate study. First students have already enrolled in the new programme in 2013/2014 academic year.

Six study programmes, which were for the first time implemented in the academic year 2007/2008, have been reaccredited. Those are the undergraduate, master’s and doctoral programmes of Mathematics and undergraduate, master’s and doctoral programmes of Computer Science. The Faculty was preparing for the reaccreditations during the whole year 2012 and in the final stage we were also visited by a group of external evaluators. The procedures of programme reaccreditations are dictated by the Higher Education Act and take place every seven years. We will undertake the reaccreditation procedures for the study programmes Biodiversity and Mediterranean Agriculture in 2014.

First graduates of the Biopsychology and Bioinformatics programmes

In July 2013 we got our first graduates of undergraduate interdisciplinary programmes Biopsychology and Bioinformatics. The two Biopsychology graduates were also the first of that kind in Slovenian higher education, as the programme is being implemented only at UP FAMNIT. Dragan Marušič, PhD, rector of the University of Primorska, welcomed seven excellent international students from Bosnia and Herzegovina, Montenegro and Belarus, which enrolled to our undergraduate Mathematics programme. They joined the company eight other international colleagues, who enrolled in our programmes in academic years 2011/12 (2) and 2012/13 (6).

The Faculty observes and records increased interest and enrolment of foreign students in our programmes. In the academic year 2013/2014 we host 52 of them on all three academic levels. They come from Belgium, Belarus, Bosnia and Herzegovina, Croatia, Italy, Macedonia, Mexico, Montenegro, Poland, Russia, Serbia and Ukraine. Particularly those, who enrolled to the mathematical programmes, own excellent references from national and international mathematical competitions. For their needs, we provide lectures also in English. However, we decided to offer them and future generations full English programmes, which will start in the academic year 2014/2015. According to its tendency towards strong international cooperation and engagement, UP FAMNIT organized or co-organized 14 international scientific meetings and conferences in 2013.

Among all, we would like to emphasize three – Triple I conference on intuition, imagination an innovation in suicidology, mathematical conference CSASC 2013, where we have been honoured with the presence of a special guest - professor John Erik Fornaess, PhD, and international conference from the field of applied theoretical computer science MATCOS-13. With mentioned three conferences in particular, UP FAMNIT has proven its high standards of international research cooperation and intends to do so also in the future – several conferences have already been placed on our 2014 calendar.

Scientific journal Ars Mathematica Contemporanea is published by the

University of Primorska and the Society of Mathematicians, Physicists and Astronomers of Slovenia (DMFA). In 2011, the journal was included in Science Citation Index (SCI) list, which was a historical moment for mathematic science in Slovenia. In 2012, the journal already listed in the second quarter of the SCI journals from the field of mathematics. The editors-in-chief are our professor Dragan Marušič, PhD, and Tomaž Pisanski, PhD.

In 2013 UP FAMNIT started with its first national research program, the psychiatric research program Alive? Alive! Research and Prevention of Suicide (ARRS no. P3-0384) led by Prof. Diego de Leo, DSc. The program represents a comprehensive approach to suicide prevention as one of the biggest social and public health problems in Slovenia, offering innovative ways to the study suicidal behaviour. The main objectives of the program are: to reduce suicide rate in Slovenia, to contribute to the multidisciplinary and multi-level suicide prevention, and to bring a wide range of research methods into suicidology in order to better understand and explain suicidal behaviour. The program is implemented in collaboration with researchers from the Slovene Centre for Suicide Research, which operates within the UP IAM.

2013 was the second year of the GReGAS project, the first European

The leading organization of the project is UP IAM. The project is coordinated by Prof. Tomaž Pisanski, PhD and Prof. Dragan Marušič, PhD and is conducted in the context of the Eurocordes / Eurogiga programme. It includes not only partners from Croatia, Germany, Slovakia, and Turkey, but also associated partners, high-profile mathematicians from Austria, Israel, New Zealand, Great Britain and the United States.

At University of Primorska living laboratory SME ViLLab, which was

developed in the frame of EnergyViLLab project in 2012, successfully continued its activities. The mission of the SME ViLLab is to increase energy efficiency of houses and consequently reduce the air pollution in the region, by providing a platform of SMEs and information to residents about how to retrofit their existing home or how to build an energy-efficient new home.

Living laboratory SME ViLLab is an environment in which small and medium enterprises, which work in the area of energy efficiency of houses, university, municipalities in the region and citizens are intergraded. The stakeholders of SME ViLLab, lead by University of Primorska, are Mestna občina Koper and SMEs that use wood for creating health living environment:

Seven students – tutors were awarded with certificates for their valuable work with their protégés in the past two years.

Tutoring system was introduced in order to strengthen the ties between students and encourage the exchange of information and experience among them. It relies on personal approach and is implemented in the University of Primorska policy through the official act on tutoring system. Every year, the University provides training for student - tutors and acquaint them also with the specific needs of foreign and disabled students.

Our Faculty sincerely supports the tutoring system and we encourage our students to get involved as tutors. We believe that with doing so, they not only give their time, energy and experiences, but also gain valuable competences for their future careers.

UP FAMNIT teaching staff enthusiastically continued with their 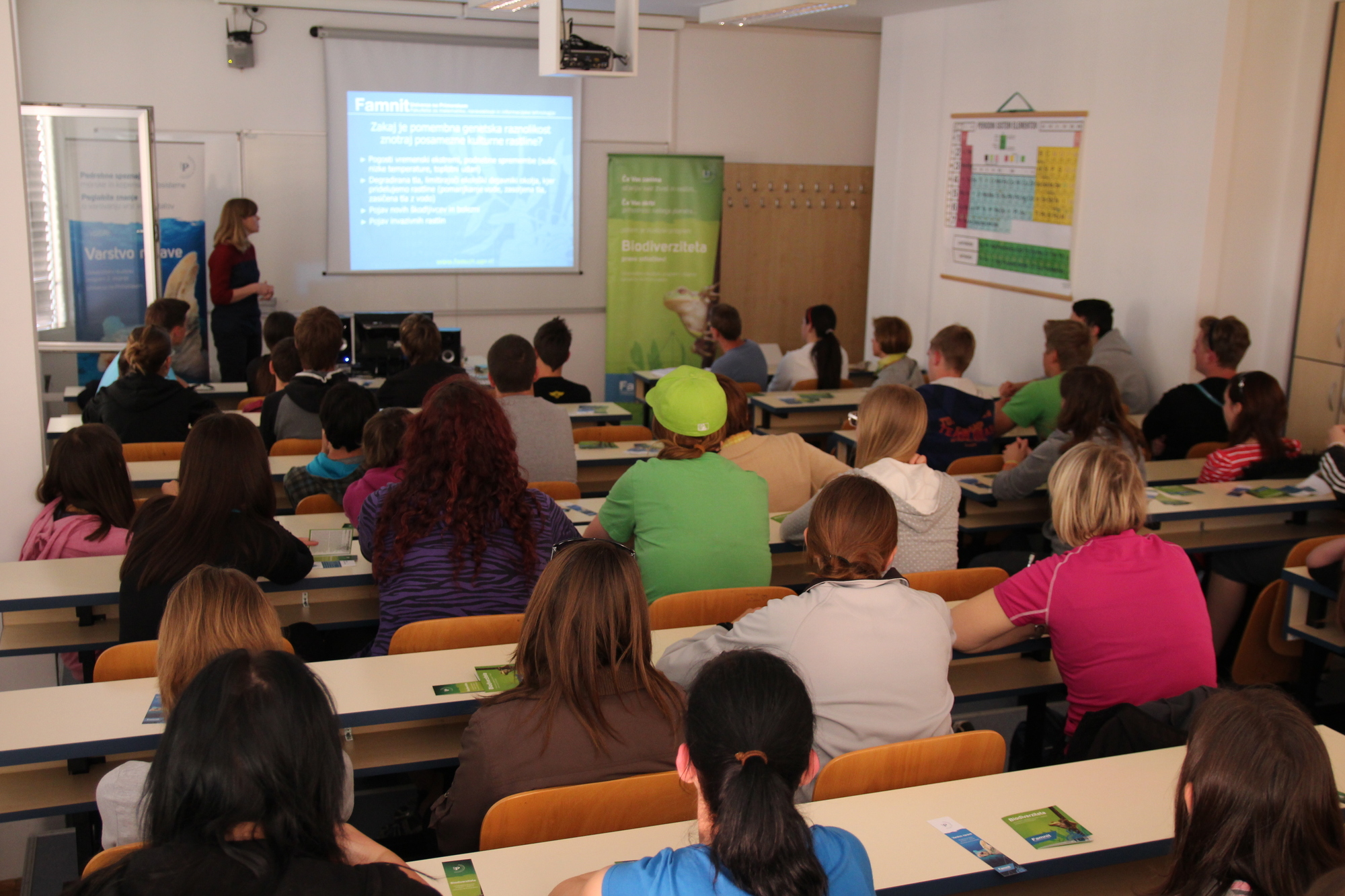 work in popularization of Natural Sciences among young and general public.

In the academic year 2012/2013 we successfully performed already the fourth consecutive cycle of FAMNIT Excursions into the Mathematical Universe – a series of popular lectures on mathematics, its tricky questions and its amazing role in our everyday life. Biological evenings at FAMNIT with a wide range of lectures from exciting field of Biology were organized for the 3rd year in a row. many Primary School students from all over the Slovenia and abroad in Koper. In September UP FAMNIT co-organised (together with The Society of Mathematicians, Physicistrs and Astronomers of Slovenia and UP Faculty of Education) the so called Mathematics research days, which were attended by 27 most successful participants of Vegovo priznanje national mathematical competition and other selected students from Slovenian Secondary Schools. Our students, assistants and professors gave lectures of selected topics from mathematics and so contributed to participants’ preparations for International Mathematical Olympiad and other international mathematical competitions.

In 2013 we organized our first Mathematical day for Primary School students and welcomed among us pupils and teachers of Primary School Sostro. Our lecturers presented them with various topics from Mathematical, Computer and Natural Sciences.

Finally, in order to promote Natural Science to students, employees and general public, we set up two exhibitions in 2013 – an exhibition on the development of the Graph Theory (still available for viewing in the Faculty hall) and exhibition ‘From atom to ecosystems’, where we presented topics our students deal with during their study programmes.