Last week, September 15th – 17th, 2022, the second edition of the Biological-Psychological Student Conference was held at UP Famnit. Both participants and organizers, who organized the event for the second year in a row, were satisfied with the high level of the programme.

34 participants from all three public Slovenian universities and from Croatia (Zagreb, Pula, Zadar) were registered and attended the conference live, in the premises of UP Famnit. Those registered contributed with oral presentations and posters from the fields of biology and psychology, and some even successfully connected these two fields.

In order to diversify and raise the quality of the scientific programme, the organizers invited four more guest lecturers to participate, who gladly gave the conference the atmosphere of a real scientific event. At the end of the conference, the organizers and all participants are very grateful to dr. David Gosar (Pediatric Clinic, UKC Ljubljana), dr. Nina Gunde-Cimerman (UL Faculty of Biotechnology), dr. Neven Iveša (Faculty of Natural Sciences, Juraj Dobrila University of Pula) and dr. Tina Tinkara Peternelj (UP Famnit).

Approximately 20 students, members of the Association of Conservation Biologists - BIODIVA and the Association of Biopsychology Students, participated in the organization. They were also helped by professors and assistants of UP Famnit, who participated in the scientific committee and thus ensured that the conference was organized at a high level. The result of the team’s hard work is the Book of Abstracts of the 2nd Biological-Psychological Student Conference, which is already published and accessible >>here<<.

Anja Klepac, president of the conference, described her experience as follows: "After 340 days from the first edition, the second Biological-Psychological Student Conference was once again successful. This time we focused our attention even more on the accompanying and social programme. With the support of the scientific committee, we listened to a variety of current scientific topics, which of course led to lengthy debates. Despite the many sleepless nights of the organizers, the satisfaction of the participants and the new friendships made outweighed all the effort.‎"

Taja Pajmon Rak, the other president of the conference, told us that "We were very happy that this year we managed to organize the conference completely in person and that among the participants there were quite a few passive ones, which came to listen to the scientific programme. Last year we had to broadcast the entire program online, but this year we decided to organize the event in person, to encourage socializing and networking among students (and we are glad we achieved this goal). The organizing team got quite few younger students, even though they didn't know anything about organizing conferences. Thus, in the core organizing team, we have high hopes for younger, up-and-coming students who (with our help, of course) will continue organizing this conference for a long time, years after we are no longer here. Our hope of course, is for our conference to become permanent, kind of a tradition for students from all over Slovenia and abroad, in order for them to come to Koper every year." ‎

The organizers are grateful to the Student Council of UP Famnit and the Municipality of Koper for the financial support of the project. A special thanks goes to UP Famnit for all the support and help, without it the event could not be held at such a level. 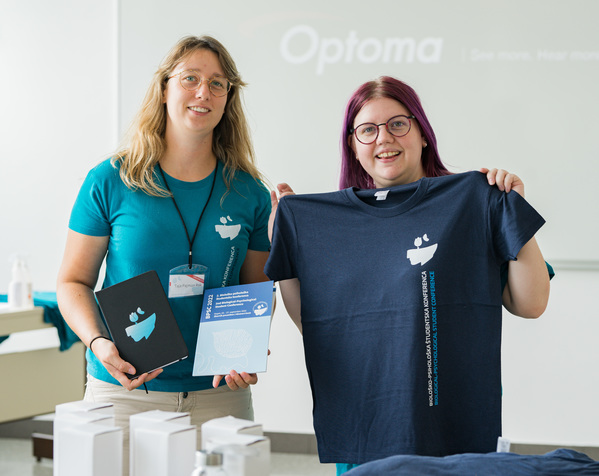